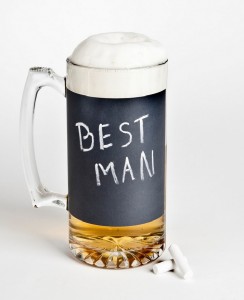 I saw the other day in TV a program about David Beckham. He was talking about his life as a footballer and about some of his team mates that had a crucial role in his career and, even, in his personal life. He mentioned specifically one of them who played with him for Manchester United, I think his name was Neville, I’m not very sure about it, of which Beckham said (it was a program obviously dubbed in Spanish) that he was “su mejor hombre en su boda”. I remained dumbfounded for a while thinking about what “su mejor hombre” could be. Until suddenly I remembered that in England and other places, the figure of the “Best Man” exists in weddings, and in this TV program, the translator (and the reviewer) did not know about this and left a literal translation: “su mejor hombre en su boda”.

If you see the translation of “Best Man” into Spanish in dictionaries, most of them do it as “Padrino de boda”. However, I do not think this is a very appropriate translation. Not in certain places and specific contexts. Let me explain myself, in Spain and in relation to Catholic weddings (and I would even say civil weddings) the concept behind “padrino de boda” and “Best Man” is different.

In Spain, the terms “padrino” and “madrina” applies in two different senses. First, when a baby is born, if baptized, that baby is assigned both a “padrino” and a “madrina”, that is, the godparents. In addition, in the case of a Catholic wedding, the “padrino” is the father of the bride and the “madrina”, the mother of the groom. If the bride’s father is dead, then her brother or her father’s brother or any other person designated by the family may act as such, and the same applies to the “madrina”.

Now let’s see the concept behind “Best Man”, which in an English or American wedding or in other culturally similar countries refers to the person designated by the groom to carry out a number of tasks such as ensuring that the wedding goes on without problems, carrying the rings with him, taking the groom to the church, welcoming guests at church and also giving a speech and then a toast to the happiness of the newlyweds. In most cases, this role is assigned by the groom to his best friend, or also to his brother or other relative.

These two figures, the “padrino” in a Spanish catholic wedding and the “Best Man” in an English wedding, may seem the same. In fact, some of the tasks I mention above performed by the “Best Man” are also carried out by the “padrino” in Spain, but not all of them and not in all cases. The fact of being so similar is why dictionaries have opted for “padrino de boda” as the translation of “Best Man”, but as I have explained above, both are two different concepts, and one of them is almost always the father of the bride and the other, the best friend of the groom. And this difference may lead to confusion, as in a translation into Spanish (of Spain) where the term “Best Man” is translated as “padrino de boda”, someone may implicitly understand that the “padrino” (as translation of “Best Man”) is the father of the bride, and that would not be the case. Anyway, what is not acceptable is using the literal translation, “mejor hombre”, as they did in that TV program. Hopefully this post will reach the TV channel that broadcast the program so they can fix the error. Sir David Beckham deserves it!